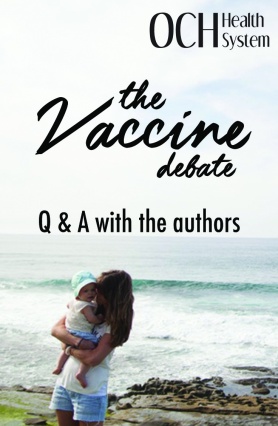 OCH Pediatrician Christopher Spinelli, DO and Maryann Karinch, a human behavior specialist, recently published a book titled The Vaccination Debate: Making the right choice for you and your children with New Horizon Press. The book is described as:

Rational approach to discussing the science of vaccines in the context of everyday life. As Spinelli and Karinch examine the schedule of vaccines from birth through adolescence, the authors shed new light on this timely and controversial issue, writing with a tone that a pediatrician would use with curious, concerned parents. (Goodreads, 2015)

Prior to publication, the authors sat down and answered some frequently asked questions in the “vaccination debate.” Read their answers to the questions below:

For people with healthy immune systems, they are generally completely safe. We say “generally” because in rare cases, a genetic abnormality makes a vaccine unsafe for the individual with that condition. Yet, despite the rigorous testing of vaccines to ensure their safety and effectiveness—often decades of research and testing—89 percent of the people who participated in the C.S. Mott Children’s National Poll on Children’s Health rated “vaccine safety” as the most important topic in children’s health research today. Anecdotal “evidence” about adverse reactions has a profound effect on public opinion, despite the overwhelming scientific evidence that vaccines are safe for almost everyone.

The short answer is: Because you don’t want to see them ever again. The vaccine for smallpox was removed from the schedule in 1980 when smallpox was considered eradicated globally. It would be great if we eradicated other diseases and no longer needed those vaccines, either. But the reality is that diphtheria, polio, measles, mumps, chickenpox, whooping cough and other diseases that many people have never seen still exist and are potentially fatal.

Herd immunity means that enough people have immunity to a contagious disease that the people who don’t have immunity are safe. If people didn’t travel outside of their communities, it would be fairly easy to achieve herd immunity for a lot of vaccine-preventable diseases like measles and mumps. But we do travel and people without immunity are vulnerable.

Herd immunity is generally defined in terms of 90-95 percent of a population being immune to a particular contagious disease. Think about how fast those numbers can tumble downward when just a few new unvaccinated kids enter your local elementary school, or one new family without immunity joins your church.

Herd immunity only works if we keep vaccinating against diseases we rarely see anymore—and then only stop when we never see them anymore.

The success of vaccinations in controlling and eradicating disease involve both the science of antigens and the science of timing. The schedule reflects the science of timing, meaning that vaccines are given at times in a child’s life when preventing the disease is vitally important to help the child thrive. For example, if a child of one year old or under contracts measles, the chances that the disease leads to very series health issues or death are much greater than if an older child contracts measles. For that reason, the vaccine is scheduled when a baby hits the one-year mark. Also, studies show that children have more anxiety about vaccines (even infants) if they are subjected to multiple “shot visits” with fewer vaccines each time instead of multiple shots a fewer visits.

Parents who believe it’s better for a child to get a disease that probably isn’t life threatening—and these typically include measles, mumps, chickenpox, flu, rotavirus and whooping cough—seem comfortable with ideas that don’t make sense to most doctors and nurses. Exposing a child to these diseases is not just a matter of mortality, but a matter of morbidity; the disease is accompanied by symptoms that can be awful for a child. Secondly, in treating the disease after the child gets it, medications are generally involved. These can include antibiotics, cough medicine, anti-diarrheal medication and more. In the case of chickenpox, there may be permanent scarring. The third consideration is the younger sibling, perhaps an infant, who is far more vulnerable to devastating effects of the disease than an older brother or sister.

Babies are continually getting extra antibodies from their mothers’ breast milk. (Formula-fed kids are lacking in this extra immunity.) But while the advantages provided by breastfeeding are long-lasting, they don’t last forever. Breastfeeding is a superb complement to vaccination.

The argument to avoid vaccines in favor of homeopathically prepared preventative solutions is deeply flawed—and we say that with all due respect to homeopathy as a source of remedies for problems that already exist. Leading spokespersons for homeopathy assert that the reason that solutions with undetectable amounts of active ingredient work is that, when the body has a need for a substance, that need creates hypersensitivity. When the body senses that what it needs is nearby, it takes advantage of it. Knowing this, how would a homeopathic formula work as a prophylactic since, at least in theory, it’s administered while the body is healthy and not in need of the substance?

Vaccines contain more than the virus or bacterium that serves as the main ingredient because some are used as preservatives, some are suspending fluids, some serve as culture material to grow the bacteria or virus, and some are enhancers that help improve the vaccine’s effectiveness.

Aluminum is an enhancer, also known as an adjuvant. The intended role of adjuvants is to provide more antibodies and prolong the vaccine’s protection by boosting the immune system’s response to the virus or bacteria agent. The inactivated type of vaccine requires adjuvants to stimulate an immune response. This is partly why it’s possible to reduce the number of actual antigens from the viruses and bacteria needed to make the vaccine, but still get effective protection. In the 1960s, there were about 3,000 antigens in a pertussis (whooping cough) vaccination. Now there are five.

Thimerosal is a preservative. Preservatives and stabilizers enable vaccines to remain unchanged when they’re exposed to heat, light, acidity or humidity. Preservatives are not, by their nature, “good” or “good for you,” and research continues to try to determine the most benign preservatives for medical applications.

No cause-and-effect link has been proven based on a large body of studies, but that is not the same as saying with certainty there is no link between vaccination and the onset of autism symptoms. The bulk of evidence points to a pattern of autism spectrum disorders that runs in families—meaning the cause of autism appears to be genetic. But—and this is an important “but”—scientists are currently trying to determine the extent to which metabolic, bio-chemical, neurological, and environmental factors affect the emergence of autism.

In other words, evidence strongly suggests that autism is genetic in nature, so vaccines wouldn’t make a child autistic, but some scientists believe that vaccination might trigger a negative response.

The profiles are so different that it’s shocking. Basically, it’s well-educated people who tend to be liberal politically and shop at places like Whole Foods as well as people with a libertarian orientation who feel that an individual parent’s right to determine what’s best for a child should supersede any government mandates. Caught in the middle are parents who have been exposed to disturbing anecdotal evidence about vaccines and are inclined to take a “modified schedule” approach to vaccinations.

In short, the profile tends to be people whose lifestyle choices, ideology, and fear override scientific evidence.

Very good. New ways of developing vaccines have been developed and those new methods open the door to an array of vaccines against diseases like cancer, HIV, and Alzheimer’s, as well as malaria, Ebola, and other diseases that have been a particular threat in Africa—where a child dies every minute from malaria according to the World Health Organization.

Some of these new methods of development have resulted in DNA vaccines, which rely on genetic material to prevent disease. Some of the diseases targeted by researchers developing DNA vaccines are cancer, HIV, malaria, and typhoid.